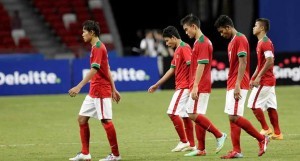 Although Indonesia lost to Thailand 0-2 on the second leg of the Finals of the ASEAN Football Federation (AFF) Cup held at Rajamangala Stadium in Bangkok on Saturday (17/12) and failed to win the Cup, President Joko Jokowi Widodo and a number of high-ranking officials appreciate the fight that the team has shown.

Dont lose hope. Take lessons from this defeat. To the Team, keep up the spirit, the President said through his official Twitter account @Jokowi shortly after the match was finished.

Previously, to boost the spirit of the team, President Jokowi pledged that the Government would give a bonus worth Rp12 billion if Indonesia can beat host Thailand.

After winning the first leg 2-1 at Pakansari Stadium in Cibinong on Wednesday (14/12), the Indonesian Team only needed a draw to win the Cup. However, despite maximum efforts that had made, Indonesia had to succumb from Thailand.

In the meantime, Cabinet Secretary Pramono Anung said he is still proud with the fight of the team, whom he considered to have fought hard to realize the dream of football lovers in Indonesia to win the Cup although they had to lose in the end. I am still proud of the Team who has played well. They have become one of the unifying forces of the country #BanggaTimnas (Proud of the Team), Pramono tweeted on Saturday (17/12).

In the meantime, Minister of Youth and Sport Imam Nahrawi said despite the loss, he is still grateful with the result. We all have to be grateful for this result. We will still give a welcoming ceremony to the players, Imam said, adding that the Team will meet President Jokowi.

Regarding the bonus promised by the President, Imam said that the Government would still give appreciation and credit for the players. Nevertheless, as for how much the bonus will be provided, he said it will be coordinated first.  (Humas Kemenpora/ES) (EP/YM/Naster)