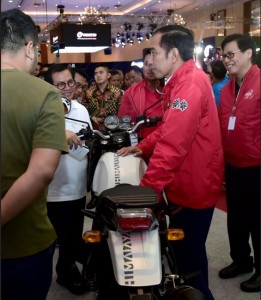 Arrived at 12.30 p.m. Western Indonesian Time, the President, wearing a red jacket was accompanied by Cabinet Secretary Pramono Anung as well as the Presidential Chief of Staff Moeldoko.

Upon his arrival, President Jokowi was welcomed by the President Director of PT. Amara Pameran Internasional Andy Wismarsyah, and Chief of the Indonesian Motorcycle Industry Association (AISI) Yohanes Loman.

The President then visited several exhibition stands and observed the latest technology used in motorcycle industry. The stands visited by him were, among others, Suzuki, Kawasaki, Royal Enfield, Honda, and Yamaha.

First of all, I would like to see the progress in motorcycle industry. Today, our national production has reached 6,500,000 motorcycles. 600,000 of them are exported. This is good; I always ask which ones to be exported. I think this is a good achievement that we can export in that amount, said President Jokowi.

For the record, motorcycles that produced by Indonesia have penetrated 45 countries. The President also expressed his appreciation for the use of local components in Indonesias motorcycle industry.

Secondly, local components used in this industry have reached above 90 percent. Around 95 to 97 percent. This is very good. Now we should focus on how to penetrate new markets and meet their requirements of price as well as quality. the President said.(BPMI/EN)