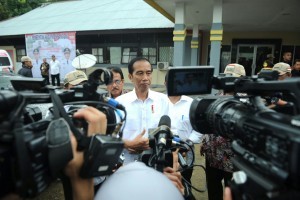 President Joko Jokowi Widodo appreciates the prompt response of the Elite Counterterrorism Unit Special Detachment (Densus) 88 of the Indonesian National Police (Polri) Headquarters and all ranks of Polri with regard to the discovery of active bombs which have not been blown up by the alleged terrorists. The said active bomb is secured at a rented house in the Babakan Village, Setu Subdistrict, South Tangerang, Banten, Wednesday (21/12) morning.

“I have received the report from the Polri Chief about it. Again, I would like to extend special thanks to the Densus 88, the Polri Chief, and its ranks who have been able to nip the incident in the bud,” the President said after the handover of certificate at the Entikong Subdistrict Office, West Kalimantan, on Wednesday (21/12) afternoon.

According to the President, the public should be grateful for the prompt handling considering in other parts of the world, the handling is often taken only after the terror had taken place. He also invites the public to increase awareness and participation in efforts to combat terrorism.

“I think we should be grateful and we hope our community are always cautious. Should there are suspicious things, please report them immediately to the authorities,” the President said.

The President reminded that the problems related to terrorist acts in fact are not only facing Indonesia, but most countries in the world share the same problem.

“I think all countries are experiencing the same thing. Therefore, we hope that the community also participate in efforts to shield Indonesia from terrorism and radicalism,” the President explained. 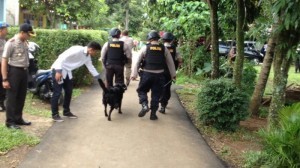 On a separate occasion, South Tangerang Police Chief (Kapolres) AKBP Ayi Supardan said that the discovery of bombs and missiles was conducted by Densus 88 during a raid in a rented house in RT 002/RW 01 at the Babakan Village, Setu Subdistrict, South Tangerang, on Wednesday (21 / 12) at around 9:00 am Western Indonesian Time.

“Three alleged terrorists were killed in the raid and one alleged perpetrator is arrested,” AKBP Ayi Supardan said.

Meanwhile, Metro Jaya Police Chief, Inspector General of Police M. Iriawan when observing the scene of the raid said that the disclosure of such terrorism action plan came after the statement from Dian, one of the bomb perpetrators using a cooking pot in Bekasi.

“From the statement, we obtain several names who are about to commit the acts approximately around Christmas and New Year, that is Adams statement in which the investigation is underway,” Iriawan said.

In response to Adams, Metro Jaya Police Chief went on to explain, Densus 88 Team went to a rented house in RT 002, Setu, South Tangerang, which is occupied by three other alleged terrorists namely Omen, Irwan, and Helmi. But when the raid is underway, the three fought using guns and threw bombs, but did not go off.

Densus Teams take action until the three alleged terrorists were killed at the scene,” Iriawan said.

According to Metro Jaya Police Chief, based on Adams statement, the alleged terrorist plans of bombing during Christmas, targeting members of Police on duty. The modus operandi is stabbing then committing suicide bombings.

“Found at the scene were three active bombs, two of which have been blasted, firearms, paralon, and a backpack containing bomb equipment,” Iriawan said. (UN/BPMI Setpres/ANT/ES) (MUR/YM/Naster).