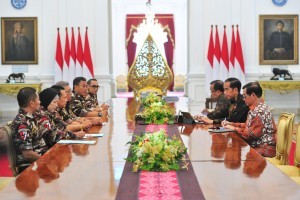 President Joko Jokowi Widodo appreciates public participation in the Bela Negara (State Defense) program including those from the Communication Forum of Indonesian Veterans Children (FKPPI) which will hold the Bela Negara Jamboree at Ragunan Scout Camp, Jakarta, on 7-9 December 2018.

The President really appreciated this effort as a concrete action that must be done by all citizens, Chairman of the FKPPI Ponco Sutowo said after meeting with President Jokowi at the Merdeka Palace, Jakarta, on Wednesday (5/12).

Ponco added that FKPPI met the President to report a plan to organize the Bela Negara Jamboree which includes  efforts to increase publics understanding that defending the state should not be only a discourse but must be internalized in the attitude and mind of every citizen.

Defending the state is an attitude that must be had by all citizens since power of a country depends on the attitude of their citizens. Therefore, state defense must be internalized as citizens commitment, Ponco explained.

According to the National Resilience Institute (Lemhanas), Ponco added, spirit to defend the country shows a decreasing trend. Thus, the FKPPI believes the spirit must be revived because current challenges not only come from military sector. In fact, non-military challenges are far more dangerous. Therefore, public participation in the Bela Negara program is crucial and must be implemented by many layers of society, Ponco added.

Ponco went on to say that the Bela Negara Jamboree will be attended by 1,300 members of FKPPI from around the country and the members came to Jakarta at their own expense, while the central committee only provided tents and so on.

In the meantime, President Jokowi during the meeting said that he would try to make time to attend the Jamboree in the midst of his busy schedule.