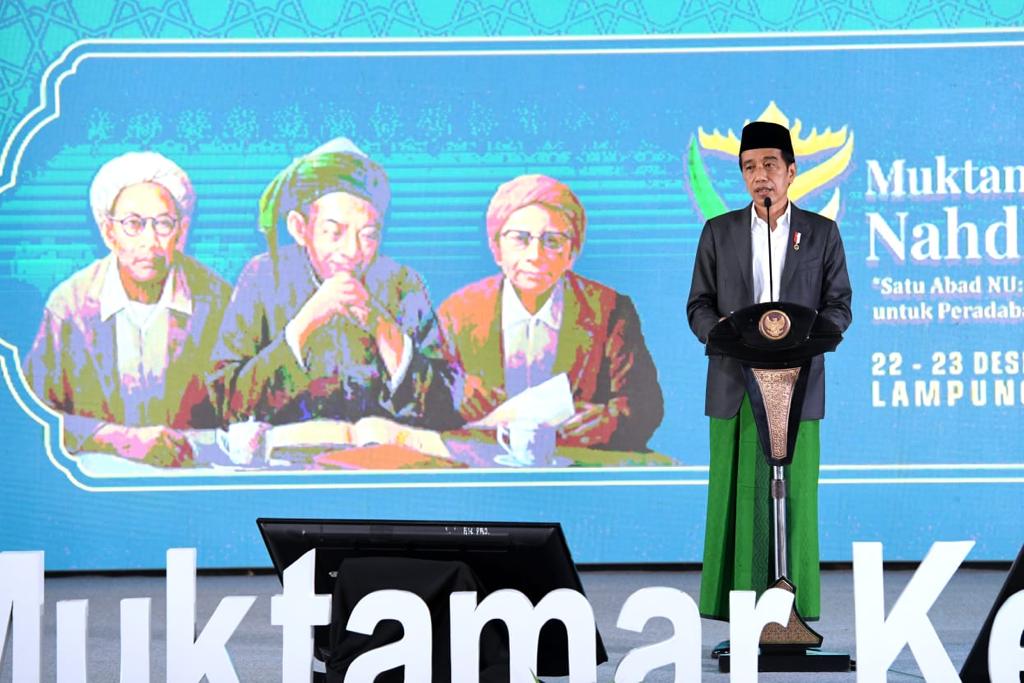 During the opening ceremony of the 34th Nahdlatul Ulama Conference of 2021 which was held at Darussa’adah Islamic Boarding School, Central Lampung regency, Lampung province, Wednesday morning (12/22), President Joko “Jokowi” Widodo extended his appreciation to Nahdlatul Ulama (NU) for their role in the efforts to handle COVID-19 pandemic in Indonesia.

NU has also played a role in calling on the people to implement health protocols and to enthusiastically participate in COVID-19 vaccination program.

“Indeed, I can see that the call of the Islamic scholars and ulema have made positive impact since it has raised awareness of the people to get vaccinated,” he said.

President Jokowi also mentioned that the support given by NU has affected the declining number of COVID-19 cases in Indonesia after it reached the peak last July when daily conformed cases was 56 thousand, and today, daily cases are at 216.

“Alhamdulillah, due to the support given by NU, yesterday the cases, alhamdulillah, alhamdulillah, the daily cases are at 216 throughout the country. If we have 514 regencies/cities with 216 cases, then it means there is only a half case in every city and regency,” he explained.

Meanwhile, the vaccination rate in the country continues to increase. At the moment, 263 million doses of vaccine have been injected to the people [aged 12 and above], and one million doses to children aged 6–11.

“Alhamdulillah, we have reached 263 million [doses], the first dose is at the rate of 73.9 percent, second dose is at 51.8 percent. We hope to reach the rate of 70 percent to prevent the spread of this COVID-19. Also, today, the vaccines injected to children aged 6–11 have reached one million doses. It is such an excellent speed, alhamdulillah,” he said.

However, the Head of State reminded all elements to remain cautious and careful due to the Omicron variant that has spread all over the world, including Indonesia.

“Currently, there are 83 thousand cases (Omicron variant) in the world, and it is also found in Indonesia. So, once again, I really appreciate the health protocols implemented in this Conference and assisted by the [COVID-19] Task Force. Insya Allah, all of us will be going back to our hometown in a healthy condition,” he affirmed.

Under the theme “One Century of NU: Being Independent in Providing Service for Global Civilization”, the 34th NU Conference was held in a hybrid format with strict health protocols. Beside Darussa’adah Islamic Boarding School, the Conference was also held in a number of places, namely Lampung University, Raden Inten State Islamic University, and Malahayati University. The event will be held for two days from 22 until 23 December 2021.