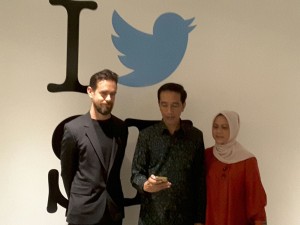 Upon his arrival, the President and his entourage were directly welcomed by the CEO of Twitter Jack Dorsey. Short after, the national anthem Indonesia Raya (Great Indonesia) was reverberated from a piano.

On the occasion, President Jokowi extended his appreciation for Twitters important role in digital democracy, and as the world’s most important media platform which spreading positive values for the society as well as good governance.

I hope Twitter increase its partnership with Indonesia in conveying the messages of humanity, such as disaster response as well as strengthening the spread of tolerance, moderation, and peace, President Jokowi said.

Before leaving the building, Presiden Jokowi posted a kultwit (lecturing via tweets) containing the messages of tolerance and peace.

Before leaving the headquarters of Twitter, the national anthem Indonesia Raya (Great Indonesia) was once again reverberated from a self-playing piano. (AS/ES/EN) (RAS/MMB/YM/Naster)