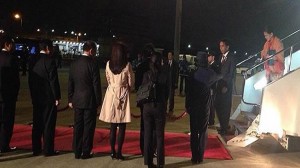 President Jokowi and First Lady Iriana were welcomed by the cold weather upon arrival at Haneda Airport, Tokyo, Sunday (22/3).

When landing at Haneda Airport, Tokyo, President Jokowi and First Lady were picked up by the Head of State Protocol of Japan, Jun Yamazaki and Ambassador Extraordinary and Plenipotentiary of the Republic of Indonesia to Japan Yusron Ihza Mahendra. The air temperature in Tokyo is reported quite cold, at about 7 degrees Celsius

Furthermore, the President and the entourage towards to the hotel for a rest and the next day will begin a series of activities of the working visit and the state visit while in Japan.

The agenda of President Jokowi on Monday (23/3), among others, are to meet Emperor Akihito (Tenno Heika) and Empress Michiko Soda, in the Empire of Japan, in the middle of Tokyo, and followed by lunch. While at around 17:30 local time, President Jokowi and the entourage are scheduled to meet with Prime Minister (PM) Shinzo Abe, at the office of Prime Minister of Japan, followed by witnessing the signing of cooperation (MoU) on cooperation between the two governments.

The Visiting of the President Jokowi to Japan this time is intended to establish the economic cooperation, primarily infrastructure either in the port, airport, power plant, railways, highways, and to increase the investment.