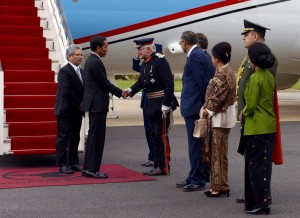 Presidential Aircraft that carried President Jokowi and his entourage landed at Stansted Airport on Monday (18/4) at 06.02 p.m. local time or on Tuesday (19/4) at 00.02 a.m. Western Indonesian Time.

The President is scheduled to conduct several agenda in his working visit to the UK, among others; to meet the British Prime Minister David Cameron, to deliver a speech at the Marine Environment Protection Commitee of the International Maritime Organization, and before the Parliament of the United Kingdom. President Jokowi is also scheduled to meet Indonesian citizens living in UK.