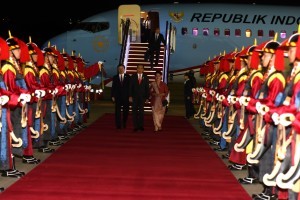 The visit to South Korea is a reciprocal visit after South Korean President Moon Jae-In visited Indonesia in 2017 and coincides with the 45th anniversary of diplomatic relations between Indonesia and South Korea. The two countries are bound by special strategic partnership agreement.

In Seoul, President Jokowi is scheduled to hold a bilateral meeting with South Korean President Moon Jae-in and attend Indonesia-South Korea business forum and business meetings. The two leaders will discuss measures to strengthen the economic cooperation of the two countries.

Also accompanying the President during the state visit to South Korea were Cabinet Secretary Pramono Anung, Chairman of the Investment Coordinating Board (BKPM) Thomas Lembong and Minister of Foreign Affairs Retno Marsudi.

On 11 September, President Jokowi will continue his trip to Hanoi. The President will be a speaker at the World Economic Forum on ASEAN, under the theme Entrepreneurship and the Fourth Industrial Revolution.