President Jokowi: ASEAN  UN Cooperation Must be Able to Fight Radicalism and Terrorism 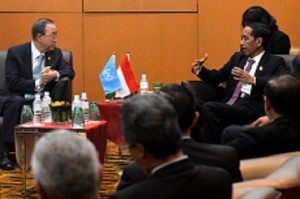 President Jokowi, accompanied by a number of ministers of the Working Cabinet, meets with UN Secretary General Ban Ki-moon on the sidelines of the ASEAN Summit in Kuala Lumpur, Malaysia, Sunday (22/11)

President Joko Jokowi Widodo hopes that partnership between ASEAN and the United Stations would continue to support ASEAN region and community that is safe, peaceful, stable, and prosperous.

The statement was made by President Jokowi at the 7th ASEAN-UN Summit in Kuala Lumpur on Sunday (22/11).

On that occasion, President Jokowi underlined three priorities of the ASEAN-UN cooperation in the future.

The first priority is to boost the implementation of the work plan of ASEAN-UN for 2016-2020, especially in four priority sectors:  micro, small and medium enterprises, maritime affairs, food security, and handling of illegal migration.

ASEAN and the UN need to actively be involved in those four sectors to ensure welfare and stability in the region, the President said.

The second priority, the President said, is that ASEAN and the UN cooperation must answer non-traditional challenges.

According to the President, non-traditional challenges are fighting extremism, radicalism and terrorism by tackling the roots of the problems on the whole, as well as ways to tackle contagious diseases such as Ebola and MERS through the advancement of health system.

In the meantime, the third priority conveyed by the President is how ASEAN-UN cooperation needs a join commitment to face global humanitarian threats caused by conflicts in various parts of the world that caused humanitarian tragedies.

The UN and all stakeholders, including ASEAN, must actively contribute to prevent those problems from happening again, the President said.

Furthermore, President Jokowi noted that (the goals) of many international agreements such as  Doha Development Agenda, Post-Kyoto Protocol Commitment to Reduce Emission, elimination of nuclear weapons, and global finance reforms have not been achieved.

However, the President is optimistic that ASEAN and UN Partnership Cooperation could boost efforts for the finalization of those issues.

Lastly, the President said that Indonesia believes that a safe, stable and peaceful region is the main prerequisite to boost development, growth and peoples welfare in the region.