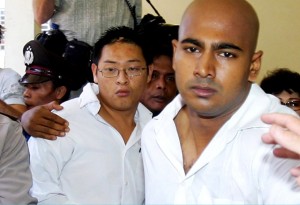 President Joko Widodo (Jokowi) received a report from the Minister of Foreign Affairs Retno Marsudi, regarding the bid submitted by the Australian Foreign Minister Julie Bishop to exchange prisoners (prisoner exchange) of the three (3) prisoners of Indonesian citizens (WNI) in Australia, with two (2) Australians that threatened execution of a death row narcotics and drugs (drugs), namely Andrew Chan and Myuran Sukumaran.

“The President asked for a study from the Ministry of Foreign Affairs about the regulations that exist in Indonesia and Australia about the possibility,” Cabinet Secretary Andi Widjajanto told to reporters at the State Secretariat Building III, Jakarta, Thursday (5/3), when asked about the president’s response on the Foreign Minister reports.

Whether the request is accommodated? “It could be yes or may not,” Andi said.

Cabinet Secretary asked reporters to wait for a statement from the Foreign Ministry, related the study that they do on the regulation of the two countries regarding the execution of death row drug.

“Foreign Ministry should make a coordinated measures because the execution of the death penalty issue also related to our diplomatic relations. Therefore, prudence in taking decisions in carrying out the death penalty should be considered,” Cabinet Secretary said.

He said that as far as he knew, Indonesia does not have regulations about the prisoner exchange that allow Indonesia to do so.

As reported by The Canberra Times, Thursday (5/3), Australian Foreign Minister Julie Bishop has called his counterpart, Foreign Minister Retno Marsudi on Tuesday (3/3) night. In their conversation on the phone, Bishop increase bid, the prospect of Australia could save the two of Australian citizens who have to be executed as a death row inmate of drugs.

“What we want to do is have a chance to speak, about the options that may still be available. Regarding the transfer of prisoners, prisoner exchange, “Bishop said in Canberra, Australia.

Just like Andrew Chan and Myuran Sukumara, the third Indonesian citizens are also of drugs smuggler who was caught while trying to import heroin. They tried to smuggle heroin from Indonesia to Australia.  (Humas Setkab/ES)