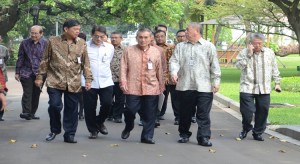 The officials of DPP REI, after received by President Jokowi at the Presidential Palace on Tuesday (23/6)

President Joko Widodo (Jokowi) asked the developers who are members of the Real Estate Indonesia (REI) should be spearheading of the one million housing program that launched by the government.

Therefore, President asked the developers to run balanced residential concept in accordance with the Minister of Public Housing Regulation (Permenpera) No. 7 of 2013, which regulates the construction of each one (1) luxury house, offset by the construction of two (2) middle houses and 3 (three) simple houses.

“The REI is expected to play a more active deal with the backlog (the gap between the need and availability of residential) with more build housing for low-income people (MBR),” Communications Team of President, Teten Masduki said, quoting the results of a meeting between President Jokowi with the Central Board (DPP) of REI, at the State Palace, Jakarta, Tuesday (23/6) afternoon.

The President conveyed that the government will provide convenience to the developers who build houses for MBR. Among others, ease of licensing and provision of land at an appropriate price with the standards of low-income house prices.

“In order for low-income people can afford to buy a house, interest rates and down payment KPR also need to be reduced,” Teten said, quoting President’s message, in a press release on Tuesday (23/6) afternoon.

On that occasion, President Jokowi approved the proposal of DPP REI to allow foreign ownership in property, with still give priority to access for the public.

Meanwhile Chairman of the DPP of REI, Hussi Eddy said, to support the government’s program to build one million houses, the developers require a large area. The REI asked the government to build infrastructure in the new lands, so the price is affordable.

“On that occasion we could also ask about tax amnesty. The President said that it was already included in the discussion, perhaps in the near future, which could be realized if all of these have a clear commitment,” Eddy said.

“We invite all members of the REI that has land, that area is suitable for building houses of MBR to immediately implement the plan. Already implemented the national coordination meeting on internal of REI. All members are committed to build it,” Eddy said as he mentioned, there are many new lands but there are no infrastructure, therefore, needed infrastructure so that it could be effective land.