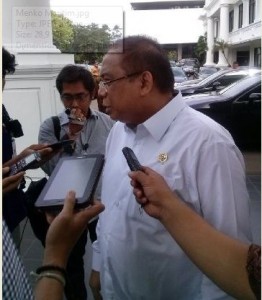 President Joko Widodo (Jokowi) provides direction related to the existence of the ‘boat people’ in a number of areas in the country, some of which are related to acts of illegal fishing.

President Jokowi directed that the ‘boat people’ to be repatriated, while the boat captain being face trial, Coordinating Minister for Maritime Affairs, Indroyono Susilo told to reporters after attending the plenary session of the Cabinet, in the office of President, Jakarta, Wednesday (3/12) afternoon.

Based on the record of Strangers Handling Team of Berau Regency, East Kalimantan, currently, there are as many as 554 (Five hundred and fifty four) boat people that accommodated in Lapangan Bulalung, Tanjung Batu, Derawan Sub-district, Berau.

Director General of Marine, Coastal and Small Islands (KP3K) Ministry of Maritime Affairs and Fisheries, Sudirman Saad, said that Indonesia has established communication with Malaysia to look for a solution handling this stranger.

554 (Five hundred and fifty four) boat people were arrested on November 16 to 17 due to illegal fishing in the marine waters of Indonesia.

“From the initial information received, the indications most of these foreign fishermen enter Indonesian waters from the territory of Malaysia. It mostly came from Malaysia, but also some of them are from the Philippines, “said Michael Tene, Foreign Ministry spokesman.

According to Tene, foreign fishermen are likely the traditional fishermen who live on the sea. They often move from one location to another. As a result, the fishermen do not have a certificate of residence or citizenship of origin country.