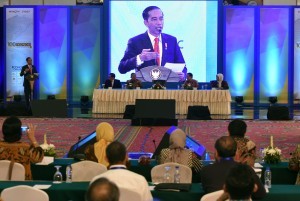 President Joko Jokowi Widodo criticized business world for staying at wait and see stance to invest because Indonesia to enter the upcoming political year of 2018.

President Jokowi reminded all that political and economic perceptions should be separated so that both sectors can run well.

When quoting a statement of Coordinating Minister for the Economy Darmin Nasution, President Jokowi said that political contestation increases spending.

There will be an increase because of spendings on advertisement, banner, supporter shirts, and basic commodities. President Jokowi added.

That means all sides should make a move so that the politics can run smoothly, and the economy as well.

Previous elections were successfully and safely held. Our economy was not affected by the elections which were previously held, President Jokowi said.