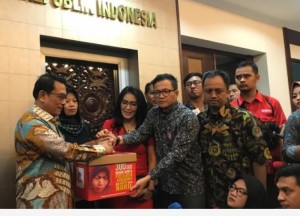 President Joko Jokowi Widodo on Monday (15/7) sent a letter to Speaker of the House of Representatives (DPR) recommending amnesty for Baiq Nuril.

Nuril – a non-tenured female teacher at SMAN 7 Mataram senior high school in West Nusa Tenggara – was sentenced to six months in prison and Rp500 million in fines for recording a lewd phone call between her and her alleged sexual harasser.

Her petition for case review was rejected by the Supreme Court.

In a letter Number R-28/Pres/07 of 2019, President Jokowi stated that charges against Nuril have raised public sympathy and solidarity since it is against the sense of justice. The defendant committed the act to defend her dignity as a woman and a mother, the President added.

Since legal remedies through a judicial process is no longer possible, President Jokowi asked the House to consider granting amnesty to Nuril based on provisions of Article 14 paragraph (2) of the 1945 Constitution.

Presidential Chief of Staff Moeldoko confirmed that President Jokowi has expressed his intention to grant amnesty to Baiq Nuril, adding that the President considers the case a humanitarian issue of common concern of all layers of society.

I hope todays meeting can resolve the problem as we intended, Moeldoko said when receiving Baiq Nuril at the Presidential Chief of Staff Office, Jakarta, Monday (15/7).