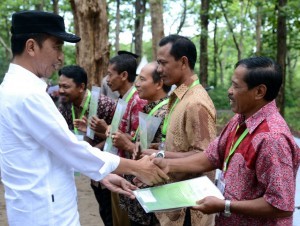 President Joko Jokowi Widodo hands over 2,890.65 hectares of land to 1,662 heads of household (KK) in Dungus Village, Madiun Regency, East Java Provice, on Monday (6/11). This hand over is regulated in the Decrees on Social Forestry Scheme (IPHPS) as well as on Recognition and Protection of Forestry Partnership (Kulin KK).

The President told the people who received the land to work hard to cultivate their land so the land will be productive, will bring benefits for them and can make them more prosperous.

You can grow cocoa or konjac. They can be commodities for export. However, you must treat them well, the President said.

The President affirmed that the Government gives forest utilization permit for 35 years. Therefore, the farmers do need to worry because they already have the permit. Previously, the permit must be extended every one or two year but now, it is valid for 35 years.

The President reminded that he will personally monitor the program of social forestry utilization until it reaches the target 4.3 million hectares. He does not hesitate to revoke the permit granted should people neglect the forest.

The President also gives opportunities to the people who want to develop their business. He mentions that the Government has facilitated the people to get loan from a number of bank that cooperate with the Government under the scheme of KUR (Smallholder Business Credit). Several banks involved in this sheme are BNI, BRI,  and Mandiri. The interest is 9 percent for this year and next year it will be 7 percent. 9 percent of interest per year means the monthly interest is under 1 percent.

The President also reminded the people who want to use their Decrees as collateral to get loan from the bank to make a good calculation so they are sure they can pay the installment.