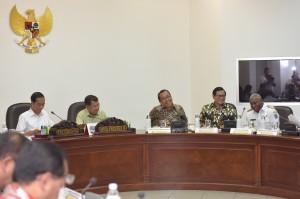 In his introductory remarks, President Jokowi said that West Papua Province faces several challenges, such as how to improve access to isolated areas, to open more new job opportunities, to eradicate poverty, and to create a more equitable development.

The President reminded all that the Human Development Index (IPM) in West Papua was placed second worse among other provinces in Indonesia. I think these are the tasks that we must complete in order to improve the prosperity of the people in West Papua Province, the President added.

According to the President, over the last 2.5 years, the Government has been focussing on accelerating infrastructure development and increasing connectivity between West Papua  and other regions in Indonesia, given that connectivity is indispensable for West Papua not only to improve access to isolated areas but also to reduce logistics costs, and to improve competitiveness of local products.