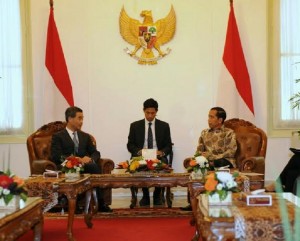 “The investment of Hong Kong in Indonesia around US $ 600 million. Then I say it is still small. Could be improved. I express also the projects that may be entered, for example, power plants, highways, ports, railways outside Java,” he said after receiving CY Leung Jokowi at the State Palace, Jakarta, Thursday (17/9).

President Jokowi added, the Indonesian government welcomed the plan of the authorities of Hong Kong, to open economic and trade office in Jakarta. President expects that the trade representative office to facilitate Hong Kong investors to invest in Indonesia.

According to the President, talks with CY Leung is still in the early stages, with the hope that the opportunity to invest in Indonesia, will be submitted to the Hong Kong investors.

Indonesia and Hong Kong have a value of bilateral trade last year reached USD5,13 billion. While Hong Kong is the 9th largest investor in Indonesia with an investment of USD 657 million last year, an increase of investment in 2011 of less than $ 200 million.