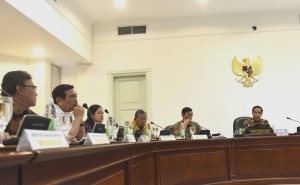 President Joko Jokowi Widodo asked to materialize corruption prevention and eradication actions. These actions should not be just written in some planning documents. There should be some real actions and not just symbolic ones.

According to the President, legal reforms have been started by taking an action to eradicate illegal levies that currently is carried out by the Illegal Levies Eradication Team (Saber Pungli). As the result, a number of public services centers have shown some improvements.

I get information that there are a lot of public complaints. The teams works have shown some results, for example the arrest of several apparatus, bureaucrats, and officials of State-Owned Enterprises who/that still have guts to take illegal levies. This action will be continued, the President said when delivering an introductory remarks at a limited meeting on Corruption Prevention and Eradication Actions, at the Presidential Office, Jakarta, on Tuesday (22/11) afternoon.

The President firmly said that the Government will not stop only  on eradicating illegal levies. Corruption eradication must be started from upstream to downstream, from prevention to strict legal enforcement.

Regarding preventive actions, the President asked to prioritize licensing and public services sectors that are directly related with the people, for example land administration services, health services, as well as education services.

I also ask for massive improvements in tax management and state revenue, particularly on natural resources and food managements, the President firmly said.

Moreover, the President added, it should also prioritize the efforts to build transparency in distributing and using grant as well as social assisstance, and pay serious attention to transparency in goods and services procurement. These are the areas prone to corruption, the President said.

President also asked to improve the mechanism of deregulation, to simplify bureaucracy procedures, including to simplify the permit of Official Travel Documents (Surat Perjalanan Dinas) that has been discussed for 2-3 times.

The effort must be continued by optimizing information technology. However, to build an IT-based system is not the only answer. It must be accompanied by an effective control, either by internal supervisor in each ministry and institution, and by inviting public participation through information openness, the President further said.

Regarding law enforcement, President Jokowi emphasized the importance to support and strengthen the Corruption Eradication Commission (KPK), either from the institutional side, independence, and budget.

The President emphasized that internal reforms in the Office of the Attorney General and Indonesian National Police (Polri) must be continued in order to produce professional law enforcement.

Moreover, to help corruption eradication works effectively, Polri and Attorney Generals Office must strengthen their synergy with KPK, the President firmly said and asked to improve the transparency of the handling of corruption cases.