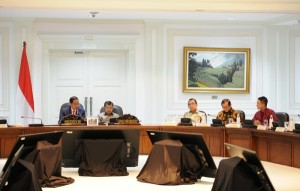 President Jokowi chairs a Limited Meeting on the evaluation of the implementation of Jambi Province program at the Presidential Office, Jakarta, Thursday (20/4). (Photo: PR/Jay)

President Joko Jokowi Widodo said that we should be able to take advantage of economic growth momentum in Jambi which began to increase again in 2016. For the record, the economy in Jambi Province grew by 4.37 percent in 2016.

In order to support the productivity of the agriculture sector, the President requested all related parties to prepare the supporting infrastructures, including dam infrastructure, irrigation, seeds, fertilizers, and agricultural technology improvement.

Apart from that, in order to improve added value for the regional economy, according to the President, it is necessary to immediately develop the process of downstream industry. With downstream industry, the President expressed his hope that the agriculture sector which constitutes a regional leading sector can be connected with the development of its processing industry. “So it is expected that it is not only to accelerate economic growth but also to create new jobs and reduce the inequality of income that prevails,” the President said during his introductory remarks at the Limited Meeting on the Evaluation of the Implementation of the National Strategic Projects and Priority Programs in Jambi Province at the Presidential Office in Jakarta, Thursday (20/4) afternoon.

On the occasion, President Jokowi also requested a report on the progress of transportation infrastructure development in Jambi Province, among others, the constructions of airports, railways, access roads, and seaports.