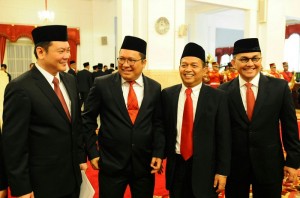 The Chairman of National Committee for the Economy and Industry (KEIN) and the Head of Peatland Restoration Agency (BRG) took a group photo after inagurated by the President, at the State Palace, Jakarta (20/1)

The members of National Committee for the Economy and Industry (KEIN) which were inaugurated by President Joko Jokowi Widodo under Presidential Decree (Keppres) Number 8 of 2016, at the State Palace, Jakarta on Wednesday (20/1) morning, have tasks to study the economy and industry. Therefore, with the studies, they will give recommendation to the President.

According to the Presidential spokesperson Johan Budi SP, the study from KEIN will be coordinated with economy and industry-related coordinating ministers and ministers. Therefore, the President asked KEIN to bring concrete recommendations, which can be executed.

When they give recommendations, they must be concrete and be able to be executed. That was the point delivered by Pak President, Johan said to the reporters at the field of Merdeka Palace, Jakarta, on Wednesday (20/1) afternoon.

Meanwhile, the Chairman of National Committee for the Economy and Industry (KEIN)  Soetrisno Bachir explained, from the discussion with President Jokowi after the inauguration at the Merdeka Palace this morning, his office stressed on the belief that this is the momentum for Indonesias industrialization.

We will underline that we are no longer a raw materials exporting country, but value added materials exporting country. With the decreasing in fuel price, the cost will be reduced. However, there is still an obstacle in interest rate, yet the inflation rate is already low, Soetrisno said while mentioning that President Jokowi hopes banks interest rate could drop faster this year, so that we could compete with other countries, particularly when facing ASEAN Economic Community (MEA).

Soetrisno convinced that the recommendation from KEIN can be executed by the President, thus they must not be impossible recommendations. He mentioned that the background of majority members of KEIN come from professionals and enterpreneurs background who are familiar with decisions making.

Thus, we are optimistic, our friends at KEIN are also optimistic, we will become a strong industrial country. The current Government expects industry to grow more, Soetrisno said.

Thus, the important message is to become an industrial country like Japan, Korea, Taiwan, and China. We will lead to it, Mas Tri, a nickname of Soetrisno Bachir said. (FID/ES) (RAS/MMD/YM/Naster)