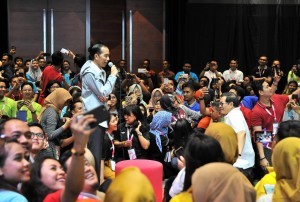 “Quickly responding to a fast-changing world is very important to make sure that our nation is not left behind other nations, President Jokowi said.

The President also asked the millenials to use social media properly and change their mindset and paradigm to ensure that the openness, digitalization and digital economy bring benefit for the country.

“Do not let hate speech, slander, hoaxes and other (negative things) circulated in social media,” President Jokowi said, adding that the rapidly-changing technology must be followed by a higher moral standard.