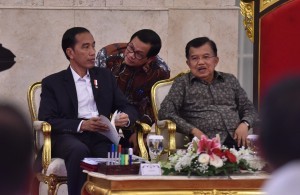 President Joko Jokowi Widodo reminded his ranks that he has submitted the 2018 Budget Implementation List (DIPA) to the Ministers and Heads of Institutions at the end of 2017. To that end, President Jokowi requested that all Ministries/Institutions (K/L) immediately execute programs and work activities that have been planned.

“Once again I want to reiterate, no more business as usual, we should get rid of it,” President Jokowi said when giving his introduction at a Plenary Cabinet Meeting Fiscal Year 2018, at the State Palace, Jakarta, Wednesday (3/1) afternoon.

The President asked the leaders of K/L to make 2018 a productive year starting from the beginning, so it is hoped that poverty, inequality, and backwardness can be resolved.

For the record, as stated in www.setkab.go.id, the DIPA for 86 K/L in Fiscal Year 2018 is Rp847.4 trillion, and transfers to the region and the Village Fund of Rp766.2 trillion. The DIPA has been submitted by President Jokowi to the K/L leaders at the Bogor Presidential Palace, West Java, on Wednesday, 6 December 2017.

In another part of his introduction to the Plenary Cabinet Meeting, President Jokowi expressed his hope that in 2018 the Government will pay attention to the increased investment in human capital.

“Our population is 250 million, 60 percent of whom are young people. This demographic bonus should become our strength and opportunity through the improvement of vocational education and trainings that we have started since 2017,” the President said.

The President emphasized that the Government should continue to improve the manpower qualification pyramid in order to become skilled labors so that industries can entirely absorb them. “We want that the skills taught in vocational schools match the world of work, and the needs of industry,” the President said.

The President also asked the Ministers of the Working Cabinet to pay attention to the prospective workers, most of whom are graduates of elementary and junior high school. The President requested that their education be upgraded.

“We improve the competence, for example, through job training programs, apprenticeship, certification programs that we have started, but we need to pay attention to the needs of our industries,” President Jokowi said.