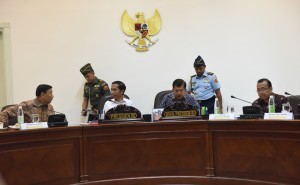 In consistent with the establishment of the Peat Land Restoration Agency (BRG) at the beginning of 2016, according to the President, the Government has set a target of peat land restoration at 2 million hectares by 2020 in seven provinces. And by the end of 2017, our target is 400 thousand hectares.

“In order to meet the 2017 Restoration target, the BRG cannot work alone, it needs the full support of all Ministries /Institutions (K/L), and local governments,” President Jokowi said while giving an introduction at a Limited Meeting on Peat Lands Restoration, at the President’s Office, Jakarta, Wednesday (11/1) afternoon.

According to the President, based on the indicative map, it is clear that the restoration of peat land should be carried out in areas that have been established as cultivated areas, ranging from production forests to areas of other users, either those already licensed or has not. While the rests, restoration is also carried out in the protected forests and conservation areas, which covers an area of ??685 thousand hectares.

When it comes to restoration of production areas, President Jokowi stressed the importance of four things. First, dissemination and education to the public should be intensified. Second, private or State-Owned Enterprises (BUMN) concessionaires are required to get involved in this restoration. Third, strict enforcement of environmental law, including the evaluation of concession licenses that have been issued for the arsons or perpetrators of the shifting function of the areas that have been designated as a protected area of ??peatland.

Lastly, the President requested that all policies, and permissions issued by Ministries, especially the Ministry of Environment and Forestry as well as the Ministry of Agriculture in the area utilization in the area of peatland ecosystems, truly maintain the hydrological functions of peat, and also consider the welfare of their surrounding communities.

For peatland that is still untouched which covers an area of approximately 6.1 million hectares, President Jokowi asked that the peatland be protected with maximum protection. “New licenses are no longer issued, unless permission for  ecosystem restoration with the community. And for the untouched peatlands which have concession permit, I request that they established as a conservation area of ??the company,” the President said.