President Jokowi Asks People not to Dispute Over Trivial Matters 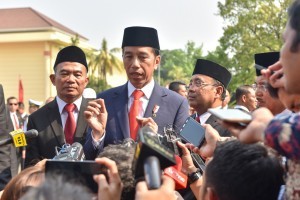 President Joko Jokowi Widodo asked all, in an emergency situation, not to dispute over trivial matters. This was enunciated by the President after leading the Commemoration of the Pancasila Day, at Pancasila Sakti Monument, Lubang Buaya, Jakarta, Monday (1/10).

Upon his inspection in Palu on Sunday (30/9), President Jokowi said the region is still in an emergency situation. The evacuation has not completed yet. Moreover, it still cannot be conducted in a number of locations due to lack of heavy equipment. However, heavy equipment had arrived in Palu last night, the President added.

Food and water shortages also become main concern because the stores are all closed and there is no electricity to operate the water pump. The Government is still looking for alternative solutions to these problems. I have ordered for mobile substations to be brought in yesterday, so people can get water, the President said.

Fuel supplies are hampered because the airport cannot be fully used for landings, roads have been cut off, and bridges are collapsed. The Government prioritizes to repair airport runway by this week.

President Jokowi further said that food assistance will be shipped to Palu directly using Hercules aircraft today. There are several planes to be dispatched and there will be more from Balikpapan and Makassar which are closer to the affected location, President Jokowi said.

The fuel is also expected to arrive at Palu today because special aircraft for fuel distribution are going to fly to the region. I think that we must resolve those problems as soon as possible to entering the second phase of relief efforts, the President said.

Regarding the communication network, according to President Jokowi, more than 1000 base transceiver stations were damaged and will gradually be repaired. Everything needs a process because the evacuation is still ongoing, President Jokowi concluded. (RAH/JAY/ES) (GWH/MMB/Naster)