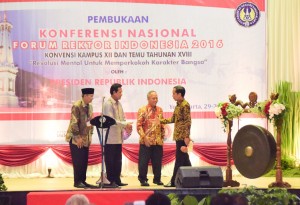 President Joko Jokowi Widodo asked the rectors of universities who join Indonesian Rector Forum (FRI) to be able to calculate whether Indonesia needs to join the Trans Pacific Partnership (TPP), RCEP block of China, and the block of European Union or not.

I will decide it soon whether we join the block or not. There should be a detail calculation about the advantages and disadvantages. However, we must know the impact if we do not join in. Let me take an example in TPP. If we do not join TPP, our textile products will become the subject of tax around 15-20 percent when we enter TPP areas, President Jokowi said when opening the 2016 Indonesian National Rectors Forum Conference (FRI), at the auditorium of Yogyakarta State University (UNY), Yogyakarta on Friday (29/1) evening.

The President said that Malaysia, Singapore, Vietnam, and Brunei Darussalam have already joined the TPP, and they are not the subject of tax. Can we compete with them? We cant, never, the President added.

According to President Jokowi, when he met President Barack Obama, President Jokowi expressed Indonesias intention to join the TPP. However, the President added, the commotions already arose in the country. I just intend to join, I have not decided it yet. I do not want the same situation happens again. It must be calculated, the President said.

Therefore, the President added, this is the duty of the universities. To all rectors, please calculate it and give us inputs. Do not dare to say we are at loss and our market will be invaded. What kind of United States products that could defeat ours? Their products are those that we do not produce. After all, it is better to calculate it, President Jokowi asked.

However, the President reminded all that he will not take much time to decide it. It must be decided soon whether we join the block or not. Either we join in or not, we must know what we can improve, because both decisions have risks.

Previously in his remarks, President Jokowi has already reminded that we are now entering the era of competition, not only facing ASEAN Economic Community (MEA), but other conditions.

From this picture you will see that the leaders of countries and governments in ASEAN countries are holding hands. But if we observe it more deeply, we know that they are not our friends but our competitors, President Jokowi said while mentioning that the fact is the countries leaders in ASEAN are our competitors. This is the era of competition.

According to President Jokowi, we are now entering the Era. Therefore, the President reminded all to prepare our productivity, work ethic, and competency.

The efficiency must become our attention. We can not go on with the old patterns. We can not use old traditions anymore. If we made wrong decision that does not lead to productivity, competency, and efficiency, we will become a loser and it will be hard to win the competition, President Jokowi said.

Attending to the event were the Minister of Research and Technology and Higher Education M. Nasir, Minister of State Secretary Pratikno, Minister of Tourism Arief Yahya, and the Governor of Yogyakarta Sri Sultan Hamengkubuwono X. (FID/DNK/ES) (RAS/MMD/YM/Naster)