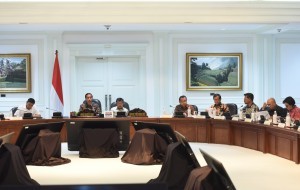 Almost half or around 49.6 percent, the economy in Sulawesi Island lies in South Sulawesi. This Province is also the main node of connectivity that connects regions in Eastern Indonesia, the President said when delivering his introductory remarks at a Limited Meeting on Evaluation of the Implementation of National Strategic Projects and Priority Programs in South Sulawesi Province, at the Presidential Office, Jakarta, Tuesday (2/5) afternoon.

The President believes that South Sulawesi can grow faster by focusing on developing agriculture and fishery sectors as well as processing and trade sectors. Based on the data received by the President, agriculture, forestry, fishery, and food crop sectors still dominate the economy in South Sulawesi with the contribution of 23.29 percent.

Therefore, President Jokowi asked to pay attention to the development of agriculture sector since this sector does not only absorbs a lot of manpowers but also can be a key factor to make the people, particularly farmers, more prosperous.  I want to emphasize that economic growth should be able to contribute to poverty alleviation and to reduce income gap, the President firmly said.

To support the gowth of agriculture sector, President Jokowi asked to well preparesupporting infrastructures, such as dams and irrigation as well as capital access through Smallholder Business Credit (KUR) scheme. It also needs to prepare processing industry related with electricity, raw water supply, transportation infrastructures, including railways and ports.