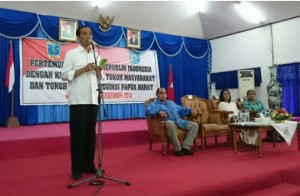 President Joko Widodo (Jokowi) conveyed, his visit to Papua that conducted since Saturday (27/12), proved that land of Cenderawasih is a very rich area. “Papua is a land that is very rich,” said President Jokowi, when dialogue with the Regional Head, Traditional and Religious Leaders of West Papua, which is held in the office of Mayor of Sorong, Monday (29/12).

However, President Jokowi reminded, very rich land that does not necessarily guarantee the prosperity and welfare of the people. Therefore, further Jokowi, the welfare and prosperity of the people not only lies in the wealth of a province or state.

President Jokowi, pointed to Singapore as an example. “Singapore has what? He did not has anything. Had no wealth at all, but it can be very rich, “said Jokowi citing South Korea and Japan, which also gained similar success as Singapore.

“This is what I entrusted to Governors, Regents and Mayors to control the wealth. Do not be put on sale. Do not sell license or permit but our wealth run out, and people do not get anything,” Jokowi said in the event which was also attended by the Governor of West Papua Abraham Octavianus Atururi.

Prior dialogue with the Regional Head, Traditional and Religious Leaders of West Papua, President Jokowi had visited Fishermen Village in Malawei District, Sorong.

There are about 50 floating houses that exist in this region, each house stands on wooden poles that set up on the outskirts of Gaya Baru Beach. Each house is connected by a semi-permanent wooden bridge less than a meter wide, that would be drowned when the sea tide. Jokowi also traverses this way.

After visiting the fishing village, President Jokowi with the First Lady Iriana Widodo scheduled to return to Jakarta, ending a series of visits to Papua since Saturday (27/12).

The presidential plane carrying President Jokowi and the entourage is scheduled to land at Halim Air Force Base, Jakarta, on Monday (29/12) at around 13.15 pm. (*/ANT/ ES)