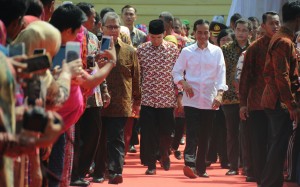 First, President Jokowi wants that bicentennial of Mount Tambora eruption, the Tambora Greets the World, should be a good momentum for the promotion of tourism both in Dompu, Bima, and West Nusa Tenggara every year.

“So I’ve whispered to the Minister of Tourism that the Tambora Festival is held every year, which is financed from the central government,” President Jokowi said.

With held the event each year, President Jokowi hopes that everyone knows where are the Dompu,  Bima, West Nusa Tenggara, and Indonesia.

Second, President Jokowi asked to maintain Mount Tambora, which has been the enactment as the National Park of Mount Tambora.

“I ask that the National Park of Mount Tambora is maintained, cared for, not to be damaged,” the President’s message.

Attending the inauguration, among others, the Minister of Environment and Forestry Siti Nurbaya, Minister of Tourism Arief Yahya, Deputy Chairman of the House of Representatives Fahri Hamzah, and Governor of NTB Zainul Majdi. (Humas Setkab/ES)