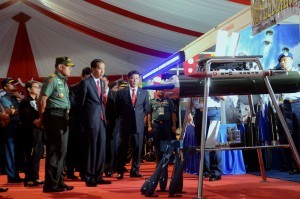 President Jokowi, accompanied by Coordinating Minister for Political, Legal, and Security Affairs as well as Commander of TNI, is looking at a device of TNI after the opening of the 2017 TNI Leaders Meeting in Cilangkap, Jakarta, on Monday (16/1) morning (Photo: PR/Oji)

President Joko Jokowi Widodo asked all ranks of Indonesian National Defence Forces (TNI) to be able to anticipate the rapid changes in the world as well as to adapt with them, particularly regarding the policies that would be applied to solve the problems and challenges. The world changes within seconds, minutes, or hours. It changes so fast. One problem has yet to be solved, another one appears, the President said when delivering his directives in TNI Leaders Meeting at Gatot Soebroto Hall, TNI Headquarters Cilangkap, East Jakarta, on Monday (16/1) morning.

Nevertheless, according to the President, a number of changes occur, for example the US policies that are predicted to change a lot after the President-elect Donald Trump inaugurated.

Therefore, we must quickly move to anticipate all changes, in particular the advances in information technology sector that change in seconds, the President said.

The President gave an example of e-commerce that changes so fast. Now, selling is not only conducted in shopping malls or modern markets. All sellers have online stores, the President said.

Almost all countries now prepare their own platforms, for example retail and logistics platforms. Thus, if Indonesia does not have its own platform, it will be difficult to control the flow of the goods.

The President asked all elements of the country to quickly move to anticipate all changes, especially things related with information technology.

The TNI Leaders Meeting, that takes place from 16-19 January 2017, features a theme With the People, TNI will be Strong, Powerful, Professional, and be Ready to Carry Out its Main Tasks.