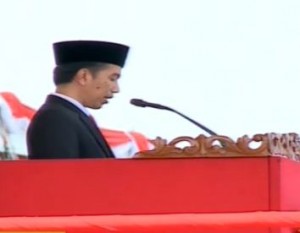 President Joko Widodo said that in five years ahead, the development of defence forces is not only intended to meet the minimum defence forces in national defence, which is called integrated Tri Matra, but also intended to strengthen the identity as a maritime country by developing the Indonesian National Defence Forces (TNI) as a regional maritime force which will be respected in East Asia  region.

With this effort, we hope TNI could be more prepared to face war pattern in the future by considering our national geographic condition as a maritime country, President Jokowi said in his speech on the commemoration ceremony of the Indonesian National Defence Forces (TNI)s 70th Anniversary, at Indah Kiat Dock, Cilegon, Banten, on Monday (5/10) morning.

Therefore, President Jokowi added, we need to increase the national defence capacity by creating a professional TNI. He asserted that TNI soldiers as professional soldiers must be truly educated and trained, as well as must  always improve their abilities by taking continuous training.

President Jokowi admitted that nearly all countries are now competing to improve their defence technology. We also try to establish a more solid  posture of TNI, as well as a more comprehensive and modern primary weaponry defence system (Alutsista). Modernization in defence technology is needed to take over the advancement of age, the President firmly said.

Furthermore, the President added, we are now materializing the independence of defence by reducing  import over-reliance on defence needs through national defence industry development. The President mentioned that defence independency is established through defence cooperation that is in accordance with national needs.

However, the President reminded all that it is not the only requirement to improve national defence forces. According to the President, in order to establish a solid defence forces, it needs character development of patriotism in every TNI soldier, as well as mental revolution to create professional soldiers.

Meanwhile, President Jokowi added, the preparation of command qualification, mechanism logistic supply in military and non-military operations, and the synergy between corps and institutions, as well as skills qualifications when carrying out operations are important.

On the occasion, President Jokowi also delivered that educated and trained TNI will not become an effective power if the soldiers and their families still live under prosperity rate. Therefore, President Jokowi convinced that the country will ensure the proper honor for the TNI soldiers.

The Government will pay more attention on the soldiers of TNI who placed in border areas, outermost islands and isolated areas, President Jokowi firmly said.

Lastly, President Jokowi asked every TNI soldier to improve their competency, professionalism and being alert wherever they are placed and in charge.