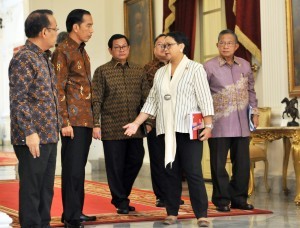 President Jokowi and several ministers prior to the arrival of Queen Maxima at the Merdeka Palace, Jakarta, Tuesday (13/2) (Photo: Rahmat/ PR)

President Joko Jokowi Widodo stated that complicated system as well as permits must be simplified so that the Government can accelerate financial inclusion.

If we cannot solve these problems, we cannot achieve our target as fast as we hope for, the President told the reporters after he received a courtesy call from the United Nations Secretary Generals Special Advocate (UNSGSA) for Financial Inclusion, Queen Maxima, from the Netherlands, at the Merdeka Palace, Jakarta, on Tuesday morning (13/2).

The President asserts that the Government wants all people, particularly small and micro enterprises, to have access to banks and other financial services so they can get access to capital. This issue has been discussed during the three meetings between President Jokowi and Queen Maxima.

In the meantime, Coordinating Minister for the Economy Darmin Nasution explained that since the visit of Queen Maxima 18 months ago, the Government has made a number of preparations to expand financial inclusion in Indonesia.

It uses a bank account, not cash like the old times. The programs of Social Security Provider Body (BPJS) also use a bank account. If we calculate, during this 1.5 years there are millions of new bank accounts, Darmin said. By 2019, the level of inclusiveness of Indonesia is expected to be the same with other counties that are more advance from us, for example India.(DNA/RAH/ES)(MMB/YM/Naster)