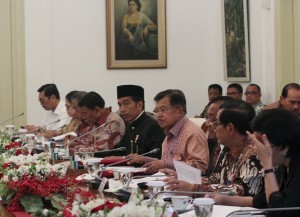 After receiving the Emir of Qatar, President Joko Jokowi Widodo presided over a Limited Meeting to discuss the optimization of the Village Funds at the Bogor Presidential Palace, West Java, on Wednesday (18/10). In his introductory remarks, President Jokowi said that Indonesia has 74,958 villages and 8,430 hamlets which all need to be built.

“We want the economy in the villages to move no less quickly than those of in the cities. In 2015, we have given Rp20.76 trillion, Rp46.98 trillion and Rp60 trillion in 2016 and 2017 respectively. This is a substantial amount of money and we need to ensure that the fund is running optimally in the field,” the President said.

Furthermore, President Jokowi mentioned productive things that can directly open the job field. He also hopes that in carrying out the duties, people perform them through deliberations of development planning in the villages. “I asked that the use of village funds be supervised and controlled both related to the type of project, the processing time, and the management,” the President concluded.