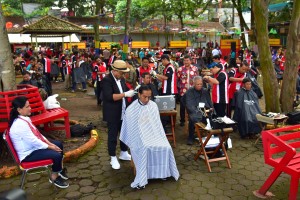 On that occasion, President Jokowi got his hair cut by a barber named Herman, who has been a barber for him since 2013.

The President said that barber is an important profession in the fashion industry, and Garut has a lot of talented barbers.

“Hair-cutting is a special skill in the fashion industry,” President Jokowi said.

Also present during the event were, among others, Minister of Public Works and Public Housing Basuki Hadimuljono and Coordinator of Special Staff to the President Teten Masduki. (EN/DNS/ES)