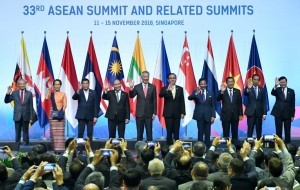 President Jokowi with a number of Head of States and Head of Governments attends the opening of 33rd ASEAN Summit at Suntec Convention Centre, Singapore, Tuesday (13/11). (Photo: BPMI)

Upon arrival to the venue, President Jokowi and First Lady Ibu Iriana Widodo took a photo with Singapore PM Lee Hsien Loong and Mrs. Ho Ching, then continued to proceed to the Ceremony Hall at Suntec Convention Center, Singapore to attend the opening ceremony.

After the opening ceremony, all leaders of ASEAN member states attended the presentation of ASEAN Business Advisory Council to the ASEAN Heads of State/Heads of Governments.

For the record, the 33rd ASEAN Summit will be held on 13-15 November 2018. Besides attending the main ASEAN Summit, the leaders are also scheduled to have other related summits, including ASEAN Plus Three Summit and the 13th East Asia Summit.
At the closing ceremony on Nov. 15, PM Lee is slated to hand over the ASEAN chairmanship to Prime Minister of Thailand Prayut Chan-o-cha. (BPMI/EN)