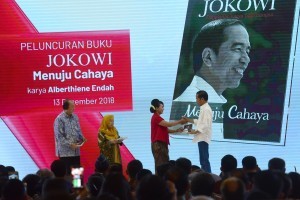 The biography was written by Alberthiene Endah, a biographer, novelist and journalist who has written several biography books of Indonesian public figures.

On that occasion, President Jokowi said that a development process is not always pleasant for everyone, but in the end the people will enjoy the results. We should educate people not to love instant results, he said.

We will implement the human development programs in a large scale right after the infrastructure development which has been the Governments focus for the past three years, the President added.