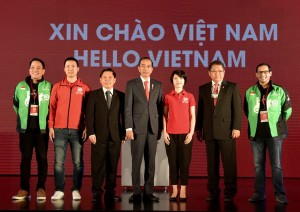 On the sideline of his state visit to Vietnam, President Joko Jokowi Widodo on Wednesday (9/12) attended the launching of Indonesian ride-hailing app Go-Jek in Vietnam, where Go-Jek is collaborating with a local team led by digital entrepreneur Nguyen Vu Duc under the brand Go-Viet.

President Jokowi congratulated Go-Jek on the expansion in Vietnam. I would like to congratulate Go-Jek for the success in collaborating with Vietnam in becoming Go-Viet, the President said.

In the meantime, GoJek CEO Nadim Nadiem Makarim during the launching said that Go-Viet is developed specifically for Vietnam. Go-Viet is not only to help users in Vietnam, but also to improve their partners welfare, Said Nadiem (CEO of Go-Jek) in his speech.

Meanwhile, Go-Viet CEO Vu Duc said the company was expected to have four services — Go-Bike, Go-Car, Go-Food and e-wallet  early next year. We are very impressed with Go-Jeks influence and we share the same vision, he said, adding that Go-Jek is Go-Viets strategic partner in terms of technological and financial matters.

For the record, the Indonesian startup unicorn announced it is ready to invest US$500 million to operate in Vietnam, Singapore, Thailand and the Philippines. On August 1 this year, Go-Viet launched a pilot operation in Ho Chi Minh City and since then, around 1.5 million have downloaded its application. Until Tuesday, Go-Viet has employed 25,000 drivers in Ho Chi Minh City and Hanoi.