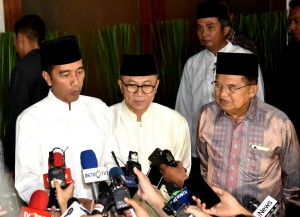 President Joko Jokowi Widodo on Friday (10/5) attended Iftar dinner at the official residence of Speaker of the Peoples Consultative Assembly (MPR) in Jakarta.

The Iftar dinner held at the official residence of Speaker of MPR is an annual activity which attended by a number of high-ranking officials. In this years event, General Secretary of Muhammadiyah Abdul Mu’ti was set to deliver sermon before breaking the fast. (BPMI Setpres/ES)