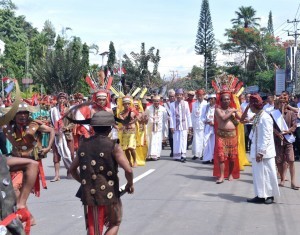 The annual event – which  is listed in Ministry of Tourisms 100 Wonderful Event Indonesia in 2018 –  combines the power of arts and culture of Tana Toraja and display various arts, as well as culinary and tourism attractions.

On that occasion, President Jokowi called on the people to continue maintain unity and harmony of Indonesia as the country is blessed with cultural diversity. In addition, the President also conveyed Christmas greetings to the Christians throughout Indonesia and expressed hope that this years Christmas will bring peace to those who celebrate it.

The Buntu Kunik airport, President Jokowi continued, will have a 1,600 meters runway along with other supporting infrastructures. With the runway, the airport is expected to be able to accommodate ATR type aircraft and can facilitate more tourists to come to Tana Toraja.  (Presidential Press and Media/ ES)