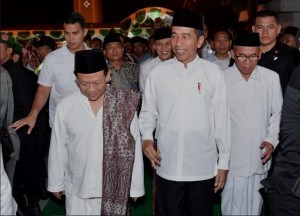 President Joko Jokowi Widodo said that our history has acknowledged the great role of the Ulemas (Islamic Scholars), Kiais (Islamic teachers) and Santris (Islamic boarding school students) during the independence struggle until today in maintaining the unity of the Republic of Indonesia as well as in leading the path to goodness and advancement.

President Jokowi explained that being a Santri means being a Muslim that loves the nation and has both moral and nationalistic attitude as shown by the Kiais and Ulemas.

I recognize that the Kiais and the Santris always put the nations interests before their own, said President Jokowi when giving remarks at the National Santri Grand Assembly, at Vastenburg Fort, Surakarta City, Saturday  (20/10),

I believe love to the religion and to the nation can go hand in hand, President Jokowi added.

The President went on say that we must feel grateful for our differences that have made us respect each other; among tribes, religions, traditions, and regional languages.

Therefore, the President reminded that we must avoid insulting and mocking each other because the unity, harmony and brotherhood are our greatest assets that need to be protected.

Let us maintain our unity, brotherhood and harmony in our beloved country, said the President.

For the record, President Jokowi had signed Presidential Decree Number 22 of 2015 on the establishment of National Santri Day, commemorated every year on 22 October.

According to the President, the establishment of Santri Day is a form of respect, appreciation and gratitude to the Kiais, Ulemas, Santri, and people who follow the role of the Kiais and the Ulemas.