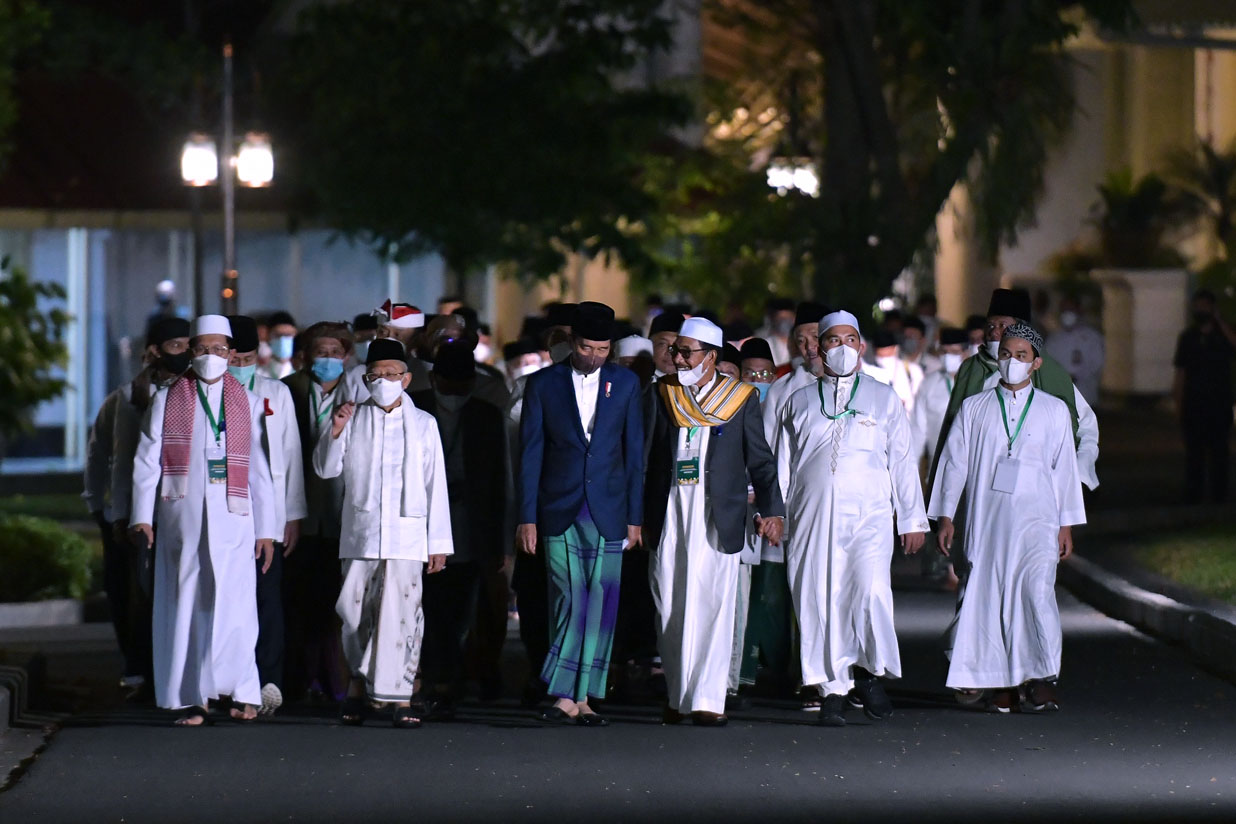 President Jokowi attends National Zikr and Prayer for the 77th Anniversary of Indonesia’s Independence, at the Merdeka Palace’s forecourt, in Jakarta, on Monday (08/01). (Photo: PR Office of Cabinet Secretariat /Oji)

“Alhamdulillahi rabbil ’alamin, we should be grateful that this evening, we could commemorate the month of the independence, the 77th Anniversary of Indonesia’s Independence,” President Jokowi said in his remarks.

On the occassion, President Jokowi reiterated that currently the world is facing uncertainties as well as energy and food crises triggered by, among others, COVID-19 pandemic and war in Ukraine.

In energy sector, the Head of State said, the Government has provided subsidy to reduce the impact of the rising price of fuel oil for the people.

“We should be grateful, alhamdulillah, when fuel price in other countries have currently reached Rp32,000 or Rp31,000, pertalite price in Indonesia remains at Rp7,650. However, bear in mind that the fuel price subsidy is very costly, from around Rp170 trillion to Rp502 trillion now,” he said.

Russia and Ukraine conflict, President Jokowi said, has triggered the price hike of food commodities due to supply problems coming from both countries that produce wheat.

“Both Ukraine and Russia have wheat stock up to 207 million ton. This has caused 330 million people are starving now. Probably, in the next six months there will be 800 million people who will be starving and accutely running out of food because nothing left to eat,” he said.

In the middle of the current situation, President Jokowi continued, Indonesian people should be grateful because national rice stock is still adequate.

“Alhamdulillah, in Indonesia, we can still find rice and its price does not increasing at all. We should be grateful for this. Due to all of your hard works, due to our joint cooperation,” he remarked.

“Let us pray together, do zikr together to beseech Allah SWT to bless our country with abundant food and energy, and to not let us run out of it. Together we strengthen our efforts, so we have abundant supply and can help other countries that are having difficulties at the moment,” he said.

The event of National Zikr and Prayer for the 77th Anniversary of Indonesia’s Independence was also filled with tausiah, sharing religious messages by Vice President Ma’ruf Amin. President Jokowi’s remarks then followed by zikr led by KH. Idris Hamid.