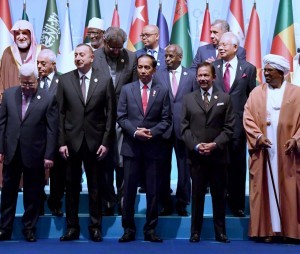 President Joko Widodo poses for a group photo at the Organization of Islamic Cooperation (OIC) Extraordinary Summit in Istanbul, Turkey on Wednesday (13/12)

The President arrived at the venue at 10.52 am local time or 02.52 pm Western Indonesian Time. Before entering a meeting room, President Jokowi and all heads of states and heads of governments, as well as the delegates had a group photo session.
In the photo, President Jokowi stands at the front line, along with President of Turkey Recep Tayyip Erdo?an, President of Palestine Mahmoud Abbas, King of Jordan Abdullah II, Emir of Kuwait Sheikh Sabah Al-Ahmad Al-Jaber Al-Sabah, Emir of Qatar Sheikh Tamim bin Hamad Al Thani, and Sultan of Brunei Hassanal Bolkiah.

In this years OIC Extraordinary Summit, President Jokowi is set to convey Indonesias stance that condemns the United States move in recognizing Jerusalem as the capital of Israel.

In the meantime, on the sidelines of the Summit President Jokowi will also have bilateral meeting with several heads of states and heads of governments.