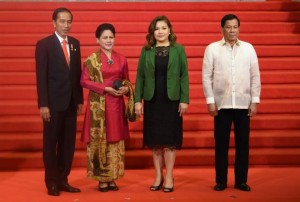 On the second day of his working visit to Manila, the Philippines, on Saturday (29/4), President Joko Jokowi Widodo attended the Opening of the 30th ASEAN Summit and a series of related meetings at the Philippine International Convention Center (PICC), Manila.

In addition to the opening ceremony, President Jokowi is also slated to attend some agendas including plenary sessions, photo session, lunch, retreat, and the signing of ASEAN declaration during the Summit.

In the afternoon, President Jokowi is scheduled to follow the closing of the 30th ASEAN Summit. The President will also attend the 12th Brunei-Indonesia-Malaysia-Philippines East ASEAN Growth Area (BIMP-EAGA) Summit and the 10th Indonesia-Malaysia-Thailand Growth Triangle (IMT-GT) Summit.

In the evening, President Jokowi and First Lady Ibu Iriana Joko Widodo will attend a Gala Dinner attended by all Heads of States/Heads of Governments of ASEAN and Delegation at the Grand Ballroom, Sofitel Philippine Plaza Hotel.

Indonesian Foreign Minister Retno Marsudi told reporters on Friday (28/4) afternoon local time that the meeting with Aung San Suu Kyi will discuss about the developments in Rakhine State as Indonesia continues to monitor the situation there. “(President Jokowi) would like to hear also from State Counselor of Myanmar Daw Aung San Suu Kyi regarding what developing issues are happening, what is expected from Indonesia, and Indonesia’s expectation towards Myanmar,” Retno said on Friday (28/4) at Sofitel Philippine Plaza Hotel.

Retno added that there has been an interim report from the Advisory Committee for Rakhine State led by former Secretary General of the United Nations Kofi Annan. “There are some recommendations in it (and) what Indonesia has done and will do is the things that, if we noitce, are consistent with the recommendations,” Retno said.

Indonesia, the Foreign Minister went on to explain, has been and is ready to assist in handling problems in Rakhine State, both short-, medium- and long-terms. “We already have the lists, the mid- and long-terms include health, education, and economic aspects, it is all there. The President will convey it to Daw Aung San Suu Kyi,” Retno concluded. (UN/RAH/ES) (MUR/YM/Naster).