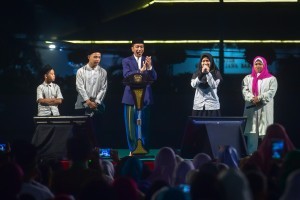 The commemoration of Santri Day on every 22 October reflects the recognition and appreciation from the State to Islamic spiritual leaders (Ulema, Kiai, Habaib, Ajengan), Islamic students (Santri) and all components of the nation who follow the path of those spiritual leaders, according to President Joko Jokowi Widodo.

“History has recorded the great role of the Ulema and Santri in the struggle for independence and in maintaining the Unitary State of the Republic of Indonesia and Unity in Diversity (Bhinneka Tunggal Ika). (The Ulema and Santri) always safeguard the path of truth and advancement,” President Jokowi said in his remarks during the 2018 National Santri Day in Gasibu Square, Bandung, West Java, Sunday (21/10).

“We must realize that the Unitary State of the Republic of Indonesia is our home that we need to take care of and must always be safeguarded,” the President further said, adding that Santri is one of the guardian of the NKRI.

“We should be grateful that Indonesia is guided by a strong tradition of Santri, a tradition of high respect and appreciation for others, which upholding the principles of hablumminallah (relation with God) and hablumminannas (human relation),” President Jokowi said.

President Jokowi further stressed that Indonesia is a big country with its diversity in ethnicity, religions, customs, traditions, and regional languages.

“These are gifts from God given to us, Indonesia. Don’t let the diversity tear us apart,” the President said.

According to President Jokowi, Indonesia has 714 ethnicities and different religions. It is a home for 263 million people from Sabang to Merauke, from Miangas to Rote Island, with 17 thousand islands, 34 provinces, and 514 municipalities and cities.