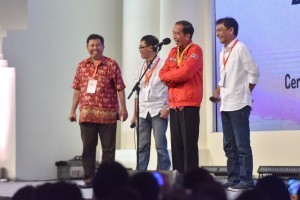 Arriving at 12:20 a.m. Western Indonesian Time, President Jokowi was greeted by Chairman of the Kagama Ganjar Pranowo, who is also Governor of Central Java.

The participants of the 2018 Kagama Reunion were entertained by Elek Yo Band that consists of Cabinet Ministers of the current Working Cabinet.

President Jokowi said in his remarks that he had prepared himself to sing with the band, but finally did not make it. I think I cannot make it the President said to the laughter of the participants.

On that occasion, President Jokowi – an alumnus of UGM himself – invited a number of Kagama members to share their stories about the old days when they were students at the University.