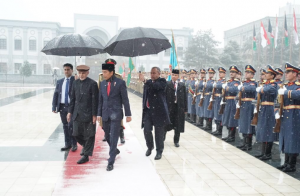 At the Arg, President Ashraf Ghani awarded President Jokowi a Medal of Ghazi Amanullah. This medal is a tribute for President Jokowis courage and determination in advancing bilateral relations between Indonesia and Afghanistan as well as in promoting peacebuilding in Afghanistan.

Besides the awarding ceremony, the two Presidents also had a bilateral meeting. In the meeting, they agreed to promote peace as well as to enhance cooperations in economic and education sectors.