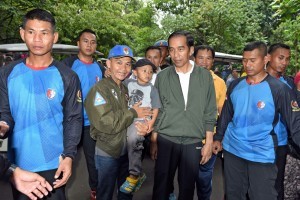 President Joko Jokowi Widodo on Sunday (1/1) began his activity in 2017 by jogging around the park of Bogor Presidential Palace and Bogor Botanical Gardenstarting at 11.30 am.

Guarded by several members of the Presidential Security Detail (Paspampres), President Jokowi started jogging around the yard in the Palace before continuing to the Garden through the back gate of the Palace.

President Jokowi finished jogging at around 1.10 pm and went back to the Palace through the same gate. (SETPRES/ES) (Naster/YM/EP)