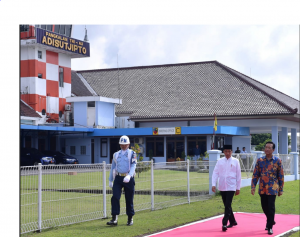 The President and his entourage on Thursday (6/12) took off from the Halim Perdanakusuma Air Force Base in East Jakarta on the Indonesian-Presidential Aircraft 1 at 08:00 Western Indonesian Time.

Deputy of Protocol, Press, and Media of the Presidential Secretariat Bey Machmudin said that the President is slated to attend the centennial of Muhammadiyah Muallimin-Muallimaat Madrasah (schools) Yogyakarta. In the afternoon, the President is scheduled to visit Aisyiyah University in Mlangi Hamlet, Sleman Regency as well as to conduct silaturahmi (cordial meetings) with the Aisyiyah Central Management, Bey said in a press release.

In the afternoon, President Jokowi is scheduled to visit Bandar Lampung University to attend the Opening Ceremony of the National Working Meeting (Silaknas) and the 28th Anniversary of the Association of Indonesian Muslim Intellectuals (ICMI) 2018. After the event, the President and his entourage will immediately leave for Raden Inten II Airport to return to Jakarta.