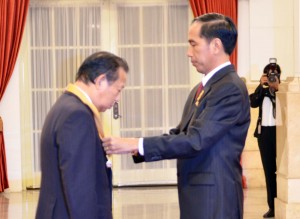 Toshihiro Nakai, which is also the leader of the Liberal Democratic Party of Japan, led a delegation of the exchange, consisting of 1,000 people from various circles to visit Indonesia for the further enhance exchanges between the two nations. This work is done by Nakai, after the June 12, 2015, the government of Indonesia to provide visa-free visits for citizens of Japan who are going to Indonesia for tourism purposes.

“I really appreciate and respect to the Chairman of the Indonesian-Japan Parliament League Toshihiro Nikai, and a thousand other figures,” President Jokowi said in a speech welcoming the hearings of Indonesia-Japan Parliamentary League, which is done after the conferment of Star Services.

President Jokowi also hopes that Toshihiro Nikai and Indonesia – Japan Parliament League that he leads continues to enhance its role in establishing the cooperation between the two countries.

He also designed the event called “Japan-Indonesia Exchange Night Party” held at Hotel Mulia, Jakarta, Monday 923/11) night, and attended by important figures from various circles in Indonesia such as politics, economy and culture.

In the delegation participated the Ministry of Economy, Trade and Industry of Japan, a number of  parliament members of  Japanese, central and local government officials including some of governors; Yamanashi Governor, Ehime Governor and Kochi Governor; businessmen such as representatives of the Keidanren (Japan Business Federation), and representatives of big companies, including from the tourism.