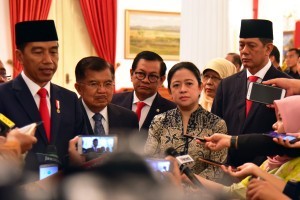 President Jokowi, accompanied by several high-ranking officials, answers questions from the journalists after inauguration of Head of the BNPB at the State Palace, Jakarta. Wednesday (9/1) Photo by: Rahmat/PR.

The National Disaster Mitigation Agency (BNPB) needs a strong leadership and Lieutenant General Doni Monardo is the right person to lead the agency, according to President Joko Jokowi Widodo.

“Indonesia is surrounded by a ring of fire, so it needs a strong management and a strong leadership to consolidate and coordinate all elements in central government, provincial governments, the TNI (Indonesian National Defense Forces), and the Polri (the Indonesian National Police), to provide a quick response to disaster,” President Jokowi said on Wednesday (9/1) after inaugurating Lieutenant General Doni Monardo as Head of the BNPB at the State Palace, Jakarta.

The President added that head of the BNPB is a cabinet-level position and the BNPP is currently conducting reconstruction and rehabilitation project in Lombok, Palu, Banten and Lampung.

“I think there are a lot of works to be done by Doni Monardo and (finishing the works) requires a strong management and a strong leadership” President Jokowi said. (DND/RAH/ES)